While this issue is not at the center of the unity debate, we in Ontario should realize that Canadians in the rest of this country think we’re a little nuts because of our fixation with brick houses. Our theory is that people in Ontario were raised on stories like the “Three Little Pigs”. We want a house that nobody can huff and puff and blow down.

What most people in Ontario don’t realize is that there are two very different types of brick houses: solid masonry and brick veneer.

As a brick wall increases in height, there is more and more danger that the inner wythe will separate from the outer wythe. To hold the two wythe’s together, header bricks are installed, usually every six rows. From the outside, header bricks look like regular bricks except they are shorter. In reality, they are the same size as a normal brick, however they are installed sideways so that the end of the brick is visible from the exterior of the building. The header bricks act as a bridge between the outer wythe and the inner wythe and prevent the two from separating.

Therefore, most solid masonry walls display header bricks in every 6th row or course. Sometimes, every brick in the course is a header brick, however there are a number of common patterns. It is not unusual to see two long bricks followed by two short ones then two long ones then two short ones. (The long bricks, by the way, are called stretchers.)

Sometimes bricks are installed over windows with their long face parallel to the wall but the brick standing on its end. These are called soldiers.

It is possible to build a solid masonry wall using metal ties to hold the two wythes of masonry together. When this is done, no header bricks will be visible and the wall can easily be mistaken for a brick veneer wall.

So What’s so Good About a Solid Masonry Wall?

There is no question that the big bad wolf will find this wall the hardest to blow down. Structurally, solid masonry walls are very strong and can, if properly maintained, provide hundreds of years of service.

What is Brick Veneer?

If solid masonry is so good, why is it that most brick houses built in the last 30 years are brick veneer construction?

When we say brick veneer, we don’t mean those little thin slices that you glue on your kitchen wall. We mean an honest to goodness brick. However, the wall is only one wythe thick. Behind the brick veneer is a wood frame wall which is actually holding up the house. The brick veneer is, in effect, siding!

Brick veneer became the norm when building codes began to require insulation in the exterior walls. One of the best insulators is air. Most good insulation does nothing but trap air; that’s why most insulations are light and fluffy. Brick is not exactly light and fluffy. Therefore it’s not really a very good insulator. A brick veneer house then, is really a wood frame house where the cavity between the studs in the wall can be insulated.

How Waterproof Is Brick?

The short answer is “not very”. With a wind driven rain, moisture will pass right through a brick wall. The one inch air space behind the brick allows this water to run down the back surface of the brick. At the bottom of the wall cavity, a plastic or metal flashing collects the water and allows it to drain out through weep holes. You’ll find weep holes spaced at approximately 32″ (every fourth brick) along the top of foundation walls and above doors and windows.

Not only do the weep holes let the water drain out of the wall, but they also allow the wind to get behind the brick and pressurize the one inch airspace between the back of the brick and the sheathing. Believe it or not, this extra air pressure reduces the amount of rain that gets forced through the wall.

So Which is Better?

Well that depends on your criteria. Solid masonry walls are certainly stronger, however brick veneer walls are plenty strong and are certainly better insulated. In the big scheme of things, the differences between the two types of construction should not be important enough to affect a purchase decision. In the interests of national unity, you shouldn’t even care whether the house has any brick.

No text may be copied from this article without the express written permission of Carson, Dunlop & Associates Ltd.

Protect Your Property From Water Damage

Winter, Humidity and your Household 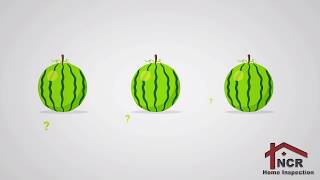